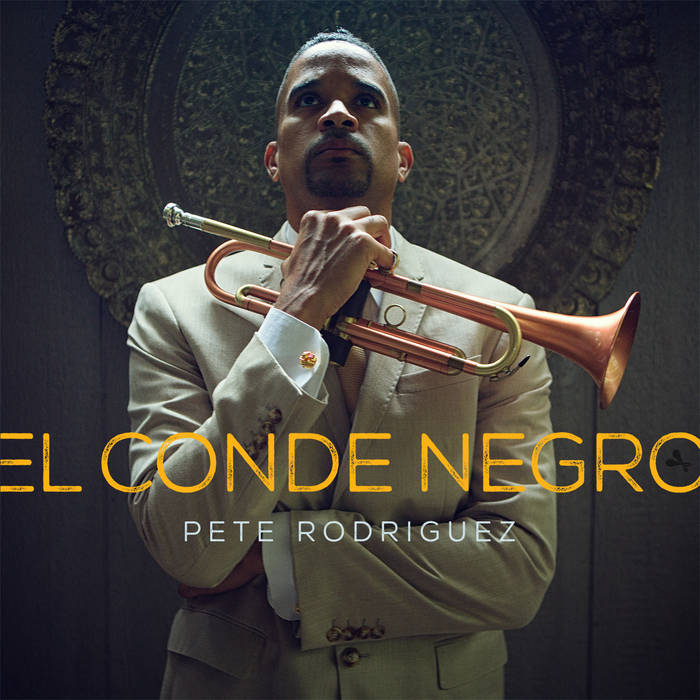 Rob O. Loving this album more and more with each listen. Pete Rodriguez is a highly skilled trumpeter and not too bad of a vocalist. He has a very tight-knit band and leaves space for Luis Perdomo to play piano which escalates this project. The other band members contributions are just as important. Pete is making his mark as a powerful contemporary Latin-Jazz artist.

Trumpeter, vocalist and percussionist Pete Rodríguez draws on his heritage as the son of Nuyorican salsa royalty as well as his rigorous classical training and career at the forefront of latin jazz on his latest Destiny Records album, El Conde Negro, a mix of elegantly melodic vocal and instrumental numbers as well as reinvented jazz versions of salsa classics originally sung by his legendary salsero father, crooner Pete "El Conde" Rodriguez. As with the younger Rodriguez's previous, critically acclaimed album, Caminando Con Papi, this new release features his longtime pianist Luis Perdomo along with Ricky Rodriguez on bass, Rudy Royston on drums and Robert Quintero on percussion. It's a continuation of bandleader's career taking the tradition of Afro-Cuban jazz to new and exciting places.

Pete Rodriguez literally grew up onstage, playing trumpet and percussion, singing coros and giving cues to his famous father's band. At fifteen, he was playing classical music with a symphony orchestra in Puerto Rico, where he would be inspired and encouraged to take up jazz by his classmate David Sanchez. At nineteen, Rodriguez took over as music director of his father's salsa orchestra. He's gone on to sing on Tito Puente's Grammy-award winning Mambo Birdland album, and supplied percussion on Eddie Palmieri and Brian Lynch’s Grammy-winning release, Simpatico. As an instrumentalist, he's shared the stage with legends as diverse as Celia Cruz, Eddie Palmieri, Chico O'Farrill, La India, Kenny Garrett, and Bebo Valdez. As a sideman, his credits also include Eddie Palmieri, Brian Lynch, David Sanchez, Chucho Valdes, Toshiko Akiyoshi, and Carlos ‘Patato’ Valdez, among others. As a bandleader, Rodríguez draws on this wealth of influences to create his own instantly recognizable, high-voltage, cross-pollinated brand of Afro-Cuban jazz.

On El Conde Negro, Rodriguez reaffirms his prowess as composer, improviser and bandleader, His imaginatively reworked versions of classic Nuyorican hits by his dad include a lilting, dancing version of Soy La Ley, on which Rodriguez supplies both understated vocals and moodily spiraling, soulful trumpet. He elevates Catalina La O with a dark, neoromantic majesty fueled by Perdomo's rippling phrases, and hazy cloudbanks of trumpet. On Sombras Que Paso, he switches out the original's noirish bolero tinges for a moody, suspenseful rhythmic tension that never quite resolves. One of the album's most electric moments is Convergencia, a moody, enigmatic, atmospheric bolero ballad. And his vocals imbue his take of Guaguanco De Amor with a tenderness and sensuality absent in the original.

This new album is Rodriguez's second on Destiny Records, established by University of North Texas alumni Michael Shields, Cameron Mizell and George Shalda, the latter of whom is responsible for the impeccable recording.

All arrangements by Pete Rodriguez except “Soy La Ley” arranged by Luis Perdomo.